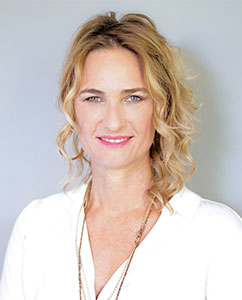 Simone is a woman of class and integrity but that does not mean that a sense of adventure and lust for the unusual has failed her. To think that her life has been a conventional one would be a grave misinterpretation of a woman who continues to inspire us with her success and determination every day. Having lived and worked on three different continents, she has juggled being a single mother of two alongside starting up not one but two successful businesses.

Simone’s experience in retail and the FMCG industry spans two decades. She has an incredible eye for spotting trends. While working as the General Manager of The RCL group Innovation Hub for 10 years, and Ideas and Insight Manager for a further three, she was involved on all levels of innovation and strategy. Travelling the globe to scout ideas and approaches, analysing and applying trends, predicting trends and product directions. It was on one of these scouting trips in early 2015 that her idea to launch Musgrave Gin was born.

Simone’s entrepreneurial spirit is, however, innate thanks to her father Keith Musgrave and her grandfather and inspiration for her Musgrave brand, Maurice Boon Musgrave. In 2001 she launched her first start-up called Yum Nums Baby Food. The product was a frozen range of baby food supplied into Pick n Pay, Baby City and Spar. Purity eventually took over the product range and branded it Purity at which point she exited the business taking her experience to Woolworths, where she worked as their client liaison between Gull Foods and Woolworths. Her role here for the following four years was in trend analysing and range planning across all prepared food categories.

“The baby food business was such a learning curve for me,” says Simone. “It’s how I got my ‘degree’ in retail production and distribution as well as starting my own brand. I learnt so much from this experience, from developing a product, working with designers, dealing with retailers, delivering to stores, managing factory staff and distribution.” Considering that which does not kill you can only make you stronger encouraged Simone to launch her second start-up, Onezee Jumpsuits and Streetwear in 2012 with a fellow colleague. This was in response to a growing global trend for fashion that was cool, hip and comfortable. They negotiated a licensing agreement with Disney to print their characters onto the onesies and for a time, the business was successful. That was, however, until the mass retailers caught onto the trend and we closed shop.

So how does one go from baby food to onesies to gin and now brandy? Simone sums it up into one word, epicurean. “I love beautiful things. It inspires me to imagine and create brands that are beautiful and luxurious in every way.”

In 2015, Simone launched South Africa’s first craft gin. The idea was first conceptualised while on a trendspotting trip to the UK, after noticing the craft trend shifting between categories with gin making the biggest impact. Back home, the craft beer market was flooded making the timing just right. Competing with NUMBER other luxury gin brands was not going to be easy, which meant the Musgrave Gin needed to stand out. Consumers are always looking for a story in their product. They want a drinking experience and ingredients which they can both relate to and play with.

Simone had recently read up on her family history and on the travels of her grandfather, Maurice Boon Musgrave. He was an ‘honest Christian man with a burning desire to help people and a willingness to travel across the world in order to do so. Having left Plymouth in 1949 bound for Africa he was set to start a new life exploring and discovering the African people and the land on which they lived. After three months on a ship with a small baby, measles and many a day of seasickness, the adventure which would change the shape of his family had begun. This spirit of endeavour, adventure and courage was what Simone wanted to live on through her Musgrave Gin. This was the story which she wanted to shape it and the story she wanted to dedicate her vision to.

Having experienced the ‘Sundowner Gin’ in Africa as a child she followed these core African influences and put them together to create Musgrave Gin. An artisan product celebrated for its top notes of Cardamom, African Ginger and Grains of Paradise.

Simone, however, was not going to stop there. Very much at the forefront of the gin revolution here in Cape Town her gin became a huge success, faster than she ever could have hoped. With Gin Bars, cocktails and usage on menu’s all over the city, the adventurer in Simone was ready to set her sights upon a new challenge. Channelling her style, elegance and femininity, South Africa’s very first Pink Gin was born. Distilled with Musgrave’s signature eleven botanicals Simone softened the high notes of Cardamom, African Ginger and Grains of Paradise with a dash of perfume and a splash of romance. Rose hips are added during the distilling process and the expressive Cardamom and obligatory Juniper contributions are softened so as not to mask the gentle perfume of the roses. A further infusion of rosewater adds a subtly exotic perfume and flavour to the gin. Of course, in true Musgrave style, the inspiration behind Musgrave Pink Gin does not come without a story of its own.

Simone’s love of romance had led her to seek inspiration from the romance of the Bygone era – ‘Africa’s romance and the fascination which the world has with Africa’. Of course, there is the history which Simone drew upon – predominantly Cleopatra. The famed and beautiful queen of ancient Egypt was said to have bathed in rose water, while Shakespeare’s Antony and Cleopatra tells of her ships being scented with rose water, ‘the very winds were lovesick’. The Romans practically drank it as a cure for numerous ailments, and Michelangelo supposedly drank it every day with his tea. However, for Simone her pink creation tells a far more poignant story about femininity and her journey as a single mother and entrepreneur in what she describes as being very much a ‘man’s world’.

The rise in female entrepreneurs is a wave which she was very much at the forefront of, and she stands today as an inspiration not only to women everywhere but also to her two daughters who have supported her throughout it all. It is her view that in this World and in Africa, a girl must be entrepreneurial in all that they do, and it is her goal to leave as much of a legacy with her children through her journey as with her end success.

Simone continues to channel her own advice in the hope that one day she will be able to simply ‘climb mountains and explore’ – ‘work hard, stay real, create partnerships, believe and always be authentic and true.